Ferris Bueller tells us to “go home, it’s over.” The stage manager explains what is about to happen in Our Town. Hamlet acknowledges that we’re watching. All examples when the fourth wall is broken: when a character in a show speaks directly to us. Their eyes meet ours and we are no longer pious spectators. We participate. Our reaction speaks back to them.

Cooking is performance art. And yet it’s a hidden drama. For unless you have the chef’s table, the music of the sizzling stove, the timpani of metal bowls or the percussing of dancing knives happens out of range.

We dine on finished product. Artfully laid out. Resting on bone china. All of the slips and the slops wiped clean. Crumbs dusted. Undesired trimmed away.

That is, until Paul Qui takes the stage. On his whim, he may present the chaos of cooking table-side. Much as he did with seared seabream on white oak. 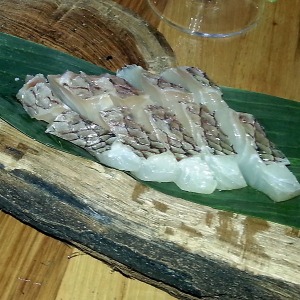 The waiter arrives with a smile below his face caterpillar. He carries a split log. The center of which a bit more shallow. It forms a channel. On one end, smoldering bits of white oak, hot from the oven. On the other end, white fish sliced like sashimi lounging on a banana leaf. 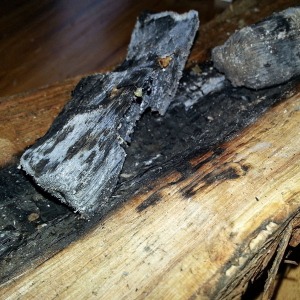 Beside the log, the waiter places a shallow bowl of soy and vinegar. Olive oil pools in droplets of various sizes.

Then carefully the waiter tweezers fish onto hot embers. Smoke rises like the Ghost of Christmas past. Grins appear around the table. Smartphones flicker their flashes and memories are recorded.

No sooner than all five pieces are laid, the kitchen ambassador removes fish in the same order. Cooking time remains under 20 seconds. They are singed on only one side.

Into the dressing, seared side up. Then decorated with shaved shallots and small flowers.

Then the mustache exits with his tools and his log stove.

This is Paul Qui’s imagination wagging it’s tail. He chooses to expose food alchemy in the dining room. He speaks to his diners directly. Into their faces the smoke rises. Into their eyes does translucent fish become charred and opaque.

These diners began tasting the very minute the tree landed on the table.

House of Cards did not invent “breaking of the fourth wall” any more than Shakespeare. It’s a theatrical device used since Ancient Greece. It is a means to reveal the inner thoughts of characters. It is a means to firmly plant the audience in the conspiracy of events. Even if those events are but a metaphor. Even if only in the minds of creator and consumer. 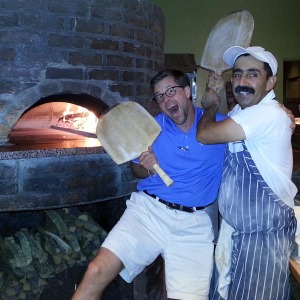 invading the kitchen at Pizza Bianco

Every open kitchen is a blatant invitation for dialogue. For the chef to pull diners into the process.

Dancers in whitecoats spinning plates. Hands in and out of heat. Tame the hissing and the gurgling and the clicking. Masters of their own station. Yet those very same gifts come together to form a single narrative for a party of 2, 4 or maybe 8.

Whether you walk past the open kitchen of Salty Sow or wink at Josh at Pieous, the effect is the same. You acknowledge each other. From actor to audience and back.

This play is for us. 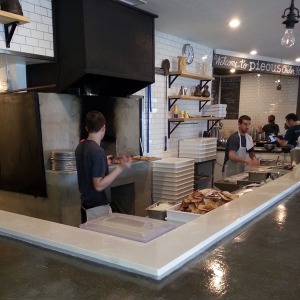 The transpiring, the transforming and the transfixing may begin with the hand of the author. However it is the open mind of the participant which ends the chapter.

Now that much is revealed, how will you tear down that wall in your own space?

Do it now while the curtain is still up and they have not left their seats.