Airplanes only arrive in the evening. They deposit fresh tourists, then whisk away the fulfilled. The landing strip is large enough to land a jet. Though you’d never be able to tell by the quiet landscape. It might as well be called Aspen. The Aspen of Hunan, China.

Except there is no skiing. No six-foot tall snow bunnies wearing furs and Prada boots. No ski bums staffing restaurants. This is China. Elegant and serene. A culture infused with black tea, yellow mountains and lush green.

A pristine mountain village who’s name means “Zhang’s family homeland.” You come to ZhangJiaJie to stand in awe of natural beauty. Beauty that has been carved into tree covered canyons.

A gondola takes you 326 meters into the foggy sky. A casual stroll around the flat mountain top costs two hours. It ends with a village, local costumes and postcards. 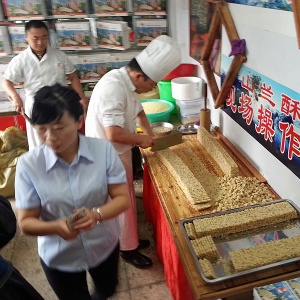 Making a rice cake. Shot in the ZhangJiaJie National Park

Such a journey drives hunger. Fortunately the National Park of ZhangJiaJie hosts many street vendors.

Rice cakes are composed of small grain rice, puffed like Rice Krispies. Seeds are folded into the batter before they are formed into rectangular logs. The cooked product is sliced warm like biscotti. 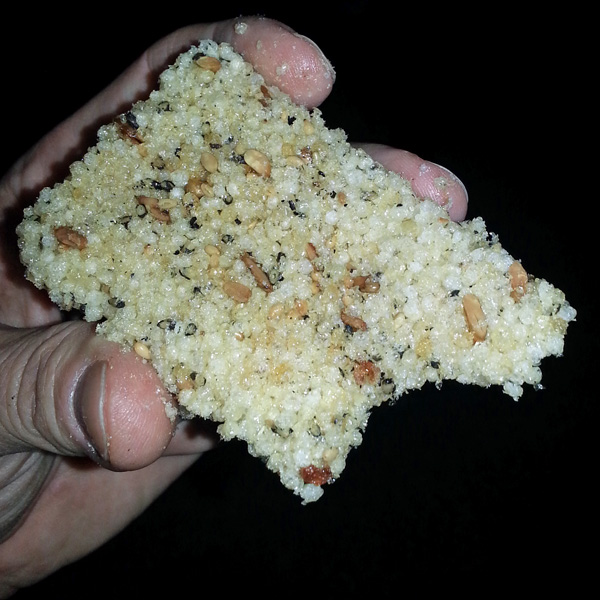 In the hand, the wafer is light and warm. Aroma of toasted rice and nuts tease the nose. Teeth experience a slight crunch for each bite. The natural sugars in the rice provide both adhesive and slight sweet taste. This is a snack as addictive as popcorn: full crunch and salt goodness with not much density. So every bite tastes like more. It will take a mountain to fill the belly. 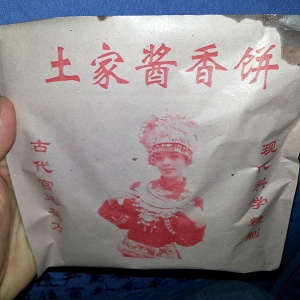 Hunan “breakfast taco” from a local vendor in the ZhangJiaJie

Next door to this food stand is the taco maker. No doubt there’s an official name to this snack. However to this Texan, the people of Hunan have co-invented the breakfast taco.

A fried egg, pickled cabbage and fresh cucumber form the tasty center of this snack. The whole dish is assembled in front of each customer. The cook builds this deliciousness by griddling ingredients to the warmth of a kiss. 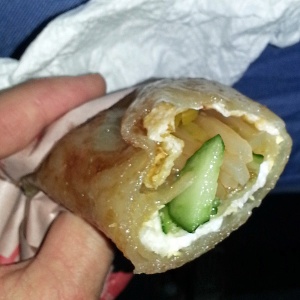 One bite into the “breakfast taco” of Hunan

The egg sits in bath of sesame oil and salt. The richness and seasoning are complete. In fact the entire order is a balance tender, oil-drenched products, crispy vegetables and a slight sour from pickles.

During the official meal at the foot of the gondola, one local dish stands out. Chinese search engine, BaiDu, surfaced this Chinese-English translation: the root of fiddle-head fern.

People of Asia favor the root system of this plant. Later it is described as Kudzu. It’s reputation lives as both a delicacy AND a health agent in China. A dough is formed out the root made paste. It is cut into squares. By some miracle of cookery, the dough is smoked and fried. 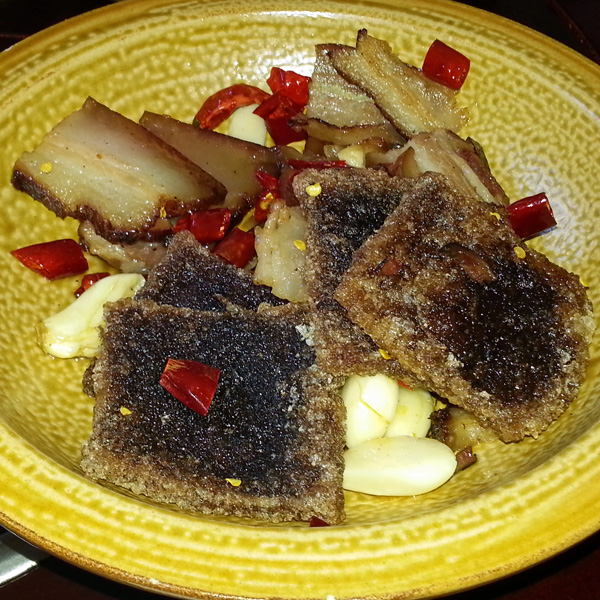 Red chili peppers and garlic are a quite common aspect of Hunan cuisine. Our Chinese hosts recommend balancing these hot dishes with food intended to cool the body. Like the way the break petal sits next to the gas. 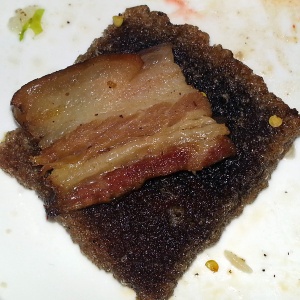 Many things draw attention to this dish. Most notably the texture. The exterior is crackly and the center gooey tough. A dichotomy found so rarely. The closest neighbor is a rice cake from Japan called Mochi. Imagine potato chips coating saltwater taffy. Ignore what that might taste like. Focus on what that *feels* like.

The flavors are dressed in a red-velvet smoking jacket. It’s a library conversation among wood paneling. An air of a humidor. The density of wood smoke is geometrically intensified with bacon. The oils from the chili peppers and garlic impart a racy quality to the dish.

Diners asking for more heat, more pungency, would simply incorporate the peppers and garlic into each bite instead of scraping them off. Clearly this dish is the most mesmerizing.

Monkeys surround the trails in the National Park of ZhangJiaJie. Their inclusion in the food scene becomes apparent with the occasional theft of fruit. Or the forbidden sharing from one genetic brother to another.

Their feet, indistinguishable from their hands, provide ample clutch for balancing on branches, fencing or granite signs.

ZhangJiaJie may be the visual landscape which provided the movie Avatar with scenery. However it’s the local tastes which are stuff of legend.

If you have the chance to visit, abandon the Western mindset. Explore with the eyes and the tongue. 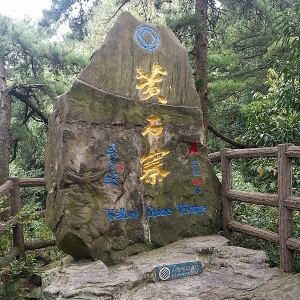 On top of the world! Yellow Stone Village granite marker