The boy leaves his mother alone in the house. While she grips her shall tightly across worn shoulders, he leads the family cow down a midnight trail. It was their only possession outside of the shack they called home. It was their only linkage to income. A paltry fee for pale of milk is how they kept their bellies half empty. If he did not act quickly they would slowly fade under the blanket of winter.

An hour into the journey, a hermit held out his hand. His promise was vague yet encouraging. For the sum of one emaciated milk cow, the boy could have seeds to a promising future. He trades the reigns for some beans. The boy’s name is Jack.

There is a reason why this fairytale is not named Alfred and the Beanstalk. Or Rocky and the Beanstalk. Jack is the name of the fool. The guy who elects to play lacrosse as the goalie where a solid rubber ball is hurdled at 110 MPH straight into his person.

Jack is the class clown. Jack is the dude who went up the hill with a sweet girl to fetch water only to come tumbling down with a concussion.

Jack is the half drunk pirate who teeters on the edge of failure while sailing the Black Pearl through the Caribbean.

In 1864 English cardmaker Samuel Hart changed card playing forever when he opted to print the “J” on the Knave card (Kn) because people could not easily see the difference between one of the lowest cards (Kn) with one of the highest, the King (K).

We play draw poker with Jacks or Better. Meaning that the first to jump into risky business of blindly betting, is the player with a pair of jacks in their hand. They have privilege of adding to jackpot. The pool of folly. The pile of fortune to be had.

We see a messy situation and scream that’s its jacked up. A scary face carved into a pumpkin is a Jack-o-lantern.

Vom Fass is a boutique chain that offers oils, vinegar, liqueurs, and whisky for sale. Most are held in oak casts with precise stoppers. Do you want to taste a $175 bottle of balsamic vinegar that has been aged for 25 years? That eyedropper sample will cost you a dollar. However it’s the only taste for a fee. The rest costs only your imagination or courage.

Sample pistachio oil. Test drive single malts from the Highlands. Take a wild ride with cranberry vinegar. Invert your perspective on schnapps with an apple liqueur from which you cannot tell the difference between it and a fresh bite of actual fruit.

It is in this moment of exploration that plum seed oil sparked inspiration. The staff from Vom Fass offered it as a topping for waffles. Oil on waffles?

The nose of plum seed oil struts around like marzipan, the almond paste that aristocratic chefs pipe into high dollar deserts. On the tongue, this oil delivers on the sweet almond flavor with a tricksters’ lie. Subtle layers of flavors prance around the room with powdered wigs like Dangerous Liaisons. An apricot kiss blown from across the room. Cardomom hiding in the shadows. All delivered in a clean glycerin. 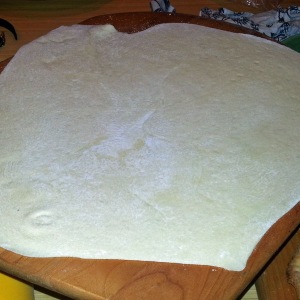 We traded hard earned cash for this magic oil. It smelled to us like one thing: a way to elevate an Italian tradition. Pizza with prosciutto and arugula.

Prepare dough in the way your grandmother taught you. Of if you did not have a Nona, follow any pizza dough recipe you find successful.

Stretch the dough to the size desired.

Layer on sliced ham. In this case, we had beautifully marbled ham roasted with a bacon exterior. Crumble fresh mozzarella on top. Shower with freshly ground black peppercorn.

Fresh from the oven

Bake on a pizzastone in an oven that’s at least 475 degrees. The hotter the better. A finished pizza takes a few minutes.  Watch for brown bubbles and a golden crust. The underside should have the texture of a new, leather briefcase. 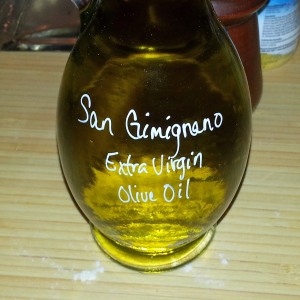 As the pizza cools a bit, toss fresh arugula with extra virgin olive oil and plum seed oil. Be careful with the proportions. Plum seed oil is a seasoning. The olive oil is the main squeeze. This might be a 3-1 proportion.

A 12 to 14 inch pizza should expect 4 cups of tossed arugula greens. On which there might be 3 tablespoons of olive oil and 1 of plumseed oil. 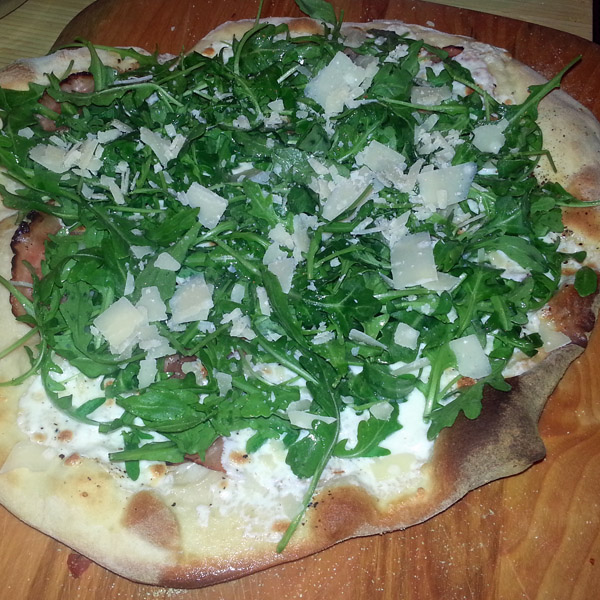 Shave Parmesan for the top. Remember that the quality of ingredients matters. Use only cheese from Parma. Don’t crash a perfectly good pizza with factory parmesean sold in green canister. Sorry Kraft. You are not invited.

Jack of Spades (cropped); image courtesy of The Card Lover

And above all else, be the Jack of your own fairytale. Play the fool. Trade in certainty for some magic beans. Join the many other Jacks that amaze the world. You might just find your own New Shimmer. 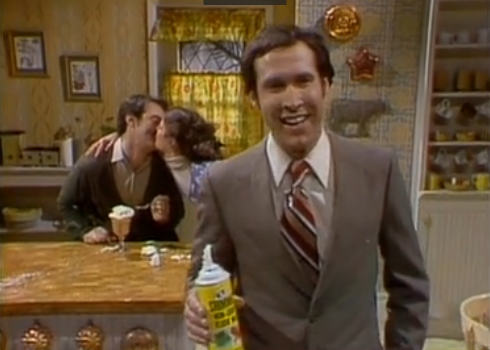