Barnett Newman painted mural sized canvases. The images purposefully avoid subject matter. Newman’s work invites introspection because of the play between massive fields of color that fill up peripheral vision and thin lines that cut across. His expressions show how the physical and the spiritual remain tethered. And then one day he makes a sculpture. 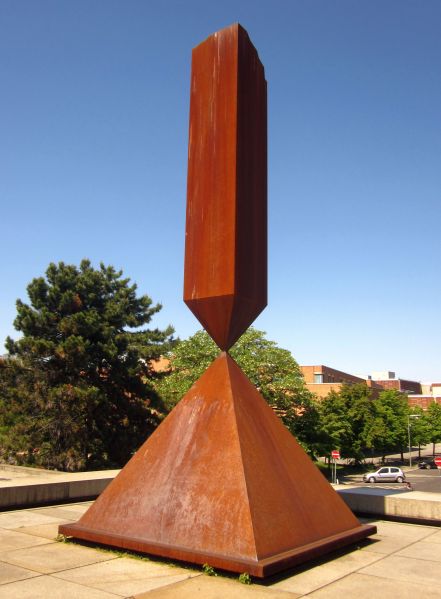 Broken Obelisk by Barnett Newman (photo by By Beek100 (Own work))

The Broken Obelisk steals most people’s breath because it violates many rules.  At first glance we see a tower with a pointy top, an obelisk, balanced on it’s head. The drama increases since it rests on the apex of a pyramid.  Your intuition knows this defies physics.

The tower portion itself is also violated.  Snapped in two by some unseen force, this sculpture speaks to a world that has been put asunder. Jonathan Jones from The Guardian makes the case that this artwork was as much a political statement as an artistic expression.

A version of the sculpture waits for you at the Rothko Chapel in Houston, TX.

Inversions are not the sole property of the art world. Yoga teachers across the globe have students in postures with their feet above their head. The world looks differently upside down.

Chef Michael Tusk from Cotogna sees the world differently. In a classic twist of quality over quantity, he assembles miracle ingredients that cause heads to spin and lines to form. 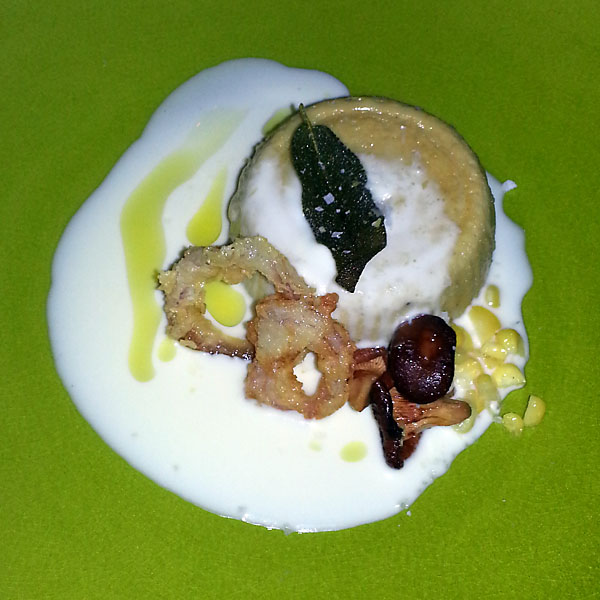 People from Bologna know sformato. It’s a classically cooked custard served as savory beginning, not as a sweet ending. It’s an antipasti.  An opening act. A way to ease into a feast.

In the hands of Chef Tusk, the sformato gets dressed with sauteed chanterelles, farm-fresh corn and fried onion rings so small that they might as well be wedding bands. A crispy sage leaf adorns this monument to “il cibo bello.”

One bite and we stand on our heads.  Expectations are inverted. 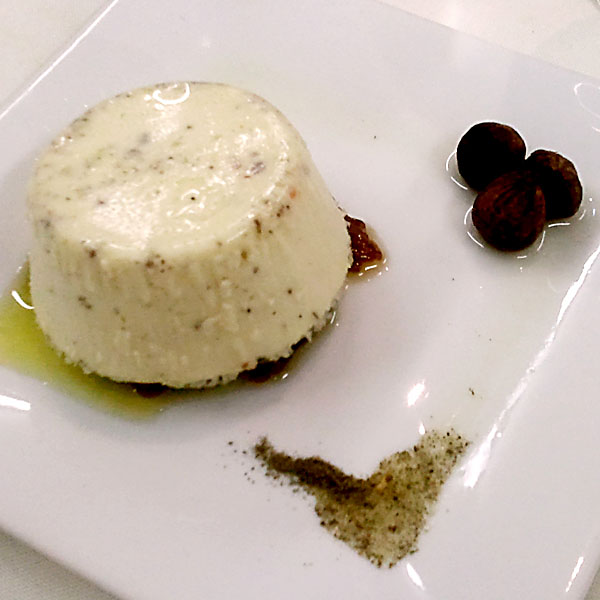 At a private dinner, the chef similarly arrested our attention with a savory custard. At first glance, it seemed that the staff was hitting the bottle a little too early. They were laying desert in front of us at the start of the evening.

Long rectangular plates with hazelnuts huddled in one corner and a nutmeg spiked custard stood proud in the other. What lay beneath provided a second surprise.

Caramelized onions in red wine pooled underneath the chilled appetizer. The eyes said creamy desert with chocolate sauce. The palate reported back that it was a starter. Like some confused mash up of ideas. Way beyond “you got chocolate in my peanut butter.”

Where these chefs succeed is by playing with our expectations while tantalizing our taste buds. They invert pyramids on their heads like a top. However instead of spinning madly to stay upright, the beast stands perfectly silent.

Certainly this experience cannot be unique. If you, in the pursuit of novelty, have found the top that stands upright without spinning, let us know. Break our expectations the way Barnett Newman broke that obelisk. Fill in that comment field.